Like the beginning of January, I started July by feeling a bit poorly, but I felt better for the rest of the week. I went to the Bloom, Allergy & Free From and Just V shows, which I will discuss in more detail in a bit. I was also going to go to a local art trail, but I didn’t go because I heard some shocking news that happened in a part of London that is close to me and made me feel unsafe, so I thought that staying in my flat would be for the best. The rest of the month saw me preparing for a series of autism videos at work, although I took another day off work due to neck and shoulder pain and I decided to work from home on the hottest day of the year because I was worried about the weather being too hot for me to travel to and from work. Due to the last day of the month being payday, I booked my tickets to go to this year’s Blogosphere Festival. While the event was above average last year, I decided to give it another chance this year because it will take place over two days in November, which means there will be more to do.

For the first two full weeks of August, I wasn’t feeling my best mentally. On my first work from home day, I felt emotionally drained, so I decided to swap my day. In that same week on one of my days off, I went to the Misshapes: The Making of Tatty Devine jewellery exhibition and I will also discuss it in further depth. At work the following week, I felt flat and clueless. I also felt like I lost my integrity to some extent. To make matters worse, I was involved in a scary incident in my local high street that same week. I reported the incident to the police online, but they closed my case because it was impossible for them to identify the suspect in spite of me describing the suspect as clearly as I could. While the police closed my case, I was satisfied that TFL finally got back to me after I reported unprofessional behaviour from a taxi driver during my ride from King’s Cross station to my flat after my trip to South Shields at the end of June. Towards the end of August, someone on Facebook sent me a friend request, but I declined it in case it was from a person I was friends with for a long time until they sent me an insulting letter that told me not to bother with them again. I also booked to stay at a hotel for three nights while I attend the Blogosphere Festival in November.

In September I went to visit some friends: one in Bournemouth and two in Swansea. On my way home from Swansea, I began to come down with a cold, which led me to take a week off work, have another break from making YouTube videos and apply for a refund of my Matilda musical ticket. Unfortunately the refund process was unsuccessful because I hadn’t seen my GP about my cold (I felt like I didn’t need to see them unless my cold lasted more than three weeks, but it only lasted just shy of two weeks) and it can take a long time for a doctor’s note to process, so I rebooked to see the show in October along with a lounge experience. My dad also stayed at my flat for one night. I received some financial news that was as excellent as some that I received last year, which made me order some new storage furniture for my flat and book a solo trip to Butlin’s Bognor Regis for a Back to the 2000s adult live Music Weekend in May 2020 (it will be my first holiday at the resort since 2004). My mum and I had previously attended a 90s Reloaded adult live music weekend at Butlin’s Minehead in 2011, so I decided to book a solo 2000s music weekend at Bognor Regis for a change. Towards the end of September, I also became the most reclusive I was in a while partly due to choosing to work my last Thursday and Monday of the month from my flat and becoming too anxious to leave my flat at certain times.

Bloom, Allergy & Free From and Just V shows at the Olympia, London 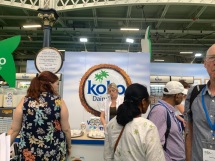 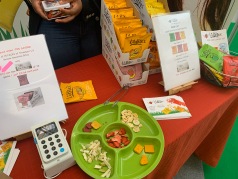 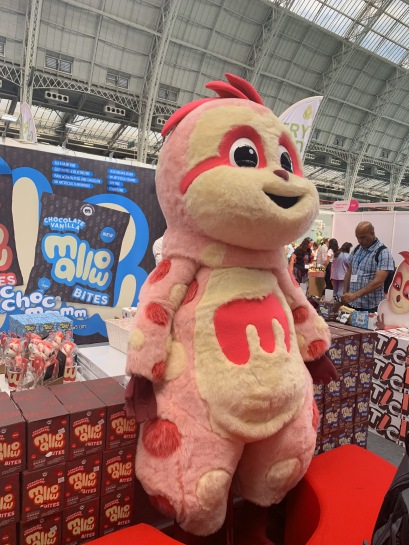 I have already been to these shows in 2016 back when the Bloom part was called Love Natural, Love you and it was very good, so I decided to give it another chance since I got a complimentary ticket for it. Although I was only at the shows for about an hour and I mainly stopped by at the Allergy & Free From and Just V stands, I was met with some familiar brands such as Koko Dairy Free, Warburton’s Gluten Free, Nakd, Lio Bites and Freedom Mallows; I sampled some items; and brought home lots of tasty products and a goody bag.

Here are the items I purchased and what I thought of them: 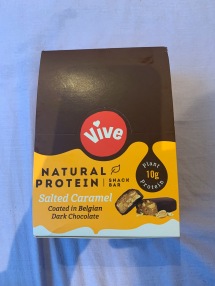 Vive Natural Protein is a new brand that I came across whilst visiting the shows. I tried the Peanut and Hazelnut varieties (there was also a Salted Caramel version, but regular readers will know that I don’t like salted caramel) and I liked them, especially the Peanut one, so I bought six of each flavour I tried for £10.00. 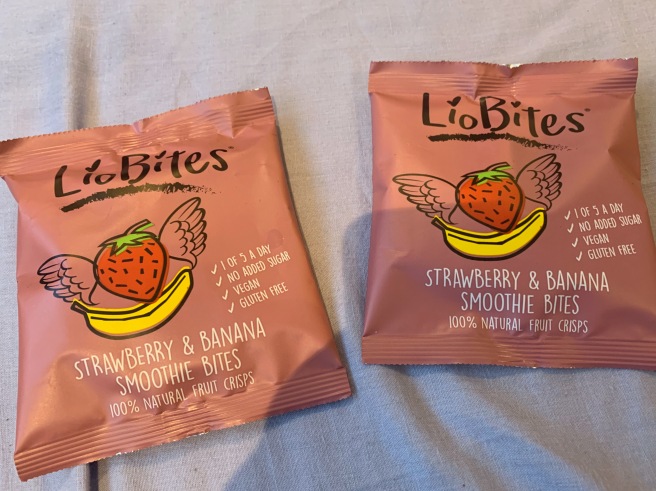 I had already tried these when I received a packet in my April 2018 Degusta Box. Even though the strawberry flavour was stronger than the banana and they had an unusual texture, I decided to repurchase them and I bought 15 bags for £10.00 as they were my favourite product I tried at the sampling table.

After having already tried the mini marshmallows from the same brand, I decided to try other products in the range. The best ones were the Chocolate Vanilla Mallow Bites while the Vegantic Mallows and the Chocolate Strawberry Bites were okay. 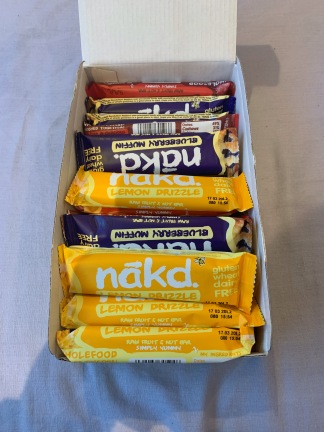 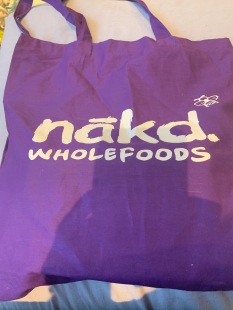 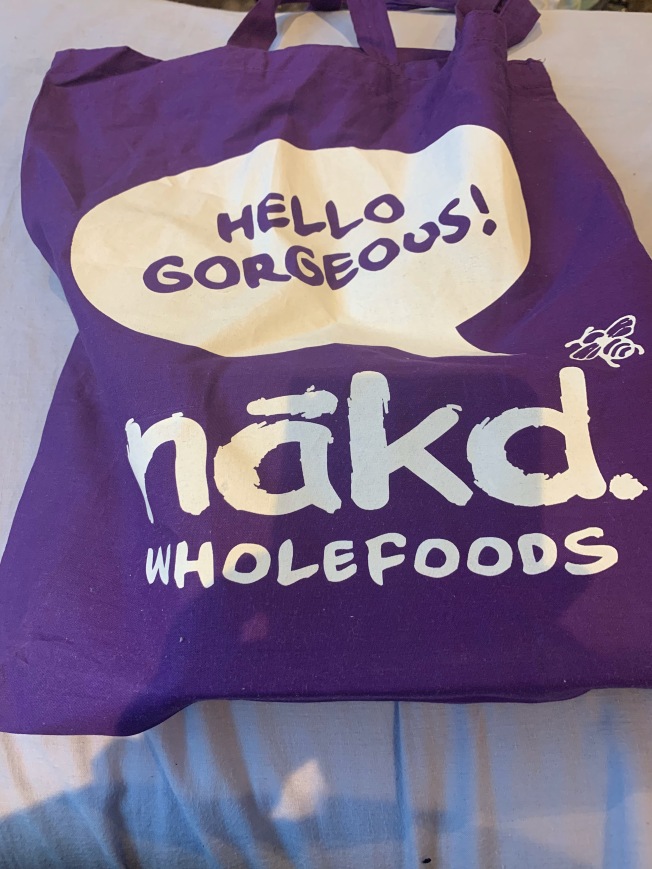 I have eaten Nakd bars for as long as I can remember, therefore I was thrilled to see that I could purchase 20 bars (I went for 4 of each chosen flavour) and a tote bag at yet another special price of £10.00. The flavours I chose were Cocoa Orange, Blueberry  Muffin, Lemon Drizzle, Bakewell Tart and Berry Delight. My favourite Nakd bar flavour has always been the Cocoa Orange one, but the rest of the bars I bought have delicious true-to-life flavours that taste exactly like the food items they are based on. 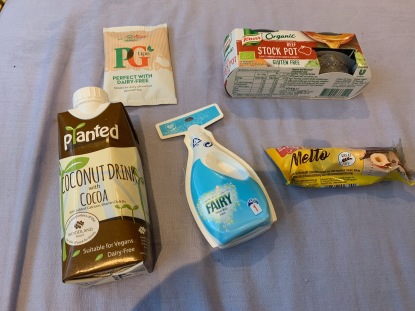 Below are the items I received for free in my goody bag:

My goody bag also contained some flyers that promoted Planted Drinks and Fairy Non Bio as well as Envirovent and Freee. I picked up some flyers for Vive and Warburton’s Gluten Free too.

Tatty Devine is one of my favourite jewellery brands, so I was excited to hear that there would be an exhibition to celebrate their 20th anniversary. 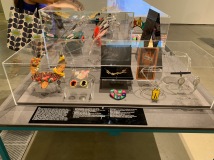 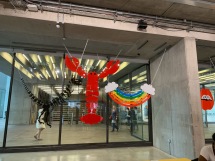 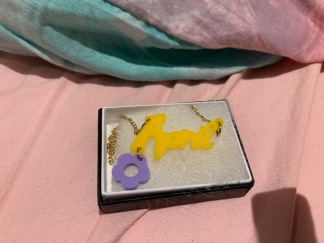 The exhibition took place at Granary Square in King’s Cross, London. Although the exhibition was smaller than I thought it would be because it took place in one room, it was very interesting to see. It even made me want to purchase another one of their famous name necklaces (I already have one with a rainbow pattern and a treble clef charm, but I can’t find it at the moment) with a gold chain, my name in yellow and a lilac flower charm.

Here are the songs I enjoyed listening to the the most this quarter:

Taylor Swift – You Need to Calm Down 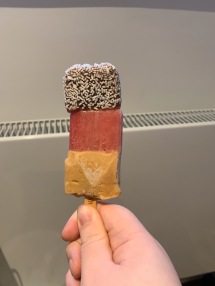 I heard about these when I was browsing the Iceland website and they sounded intriguing, so I bought them as part of my online food shop. The best part was the light brown ice tasting like a doughnut flavour that I might have tried in a chewy sweet a long time ago, but I also liked the jammy core in the centre. 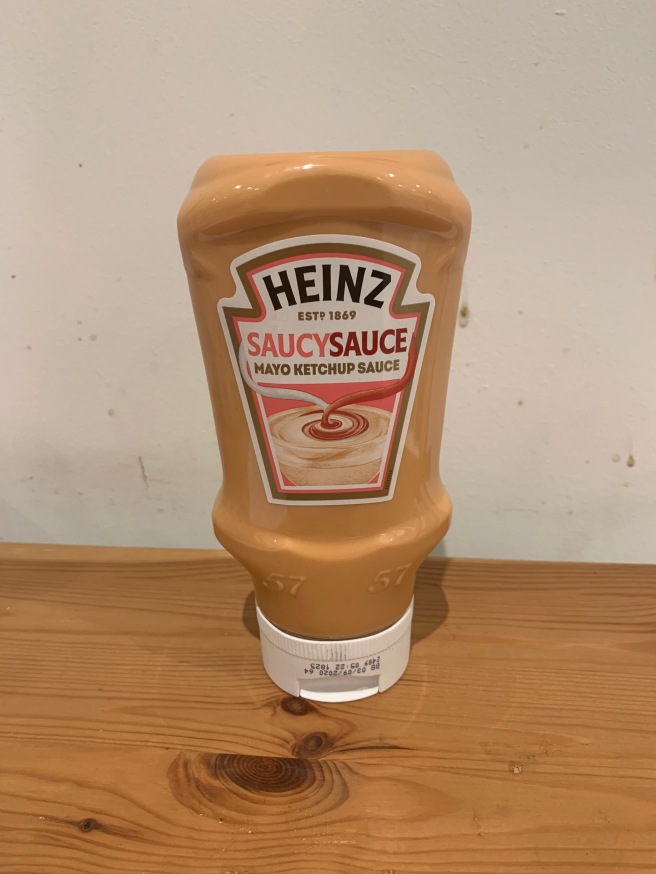 Heinz Saucy Sauce was originally going to be called Mayochup (a combination of mayonnaise and tomato ketchup) when its U.K. launch was announced on Twitter earlier this year, but the name was changed due to the American version already being called Mayochup. The sauce is essentially mayonnaise with tomato ketchup flavour and it is exclusive to Tesco priced at £2.70, which is a bit more expensive compared to other condiments on the market, but it was worth the fairly steep cost. It is especially delicious with chicken dippers and chips.

After having already tried the Pear & Elderflower cordial when I received it in my April 2019 Degusta Box, I was excited to see that a Crushed Lime & Mint variety was available in my local Co-Op. I enjoyed its cool and zingy taste with water and diet lemonade over the summer, especially during the heatwave.