Before I go into more depth about how I curb my social media consumption and usage, I would like to acknowledge that this blog post is inspired by Brogan Tate’s blog post on how she controls what she consumes on social media. Her post is very interesting, thought-provoking, relatable and even understandable in parts. When I gave Brogan feedback on her Instagram post about it, she replied by saying that I had a good grip on how I control my own social media consumption. This is one of the most positive experiences of using social media I have experienced within the past 12 months or so. Unfortunately, not everything I see on social media is positive, so I’m glad I can put tabs on what I consume to make my experience of using it far more pleasant. 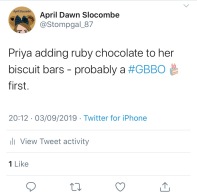 In terms of how often I post on social media platforms, my frequency of doing so has fluctuated since I started using them 12 years ago. When I first signed up to Facebook in 2007, I would post on it pretty much every day, but nowadays I only really post on it if I have some exciting news to share, if something traumatic has happened, if I share some of my Instagram photos and stories on there (my Facebook and Instagram accounts are linked), if I share my latest blog posts and YouTube videos or if I go on holiday, to an event or on a day trip. I started posting on Twitter more often than usual in 2016 (I joined in 2009) mostly by Tweeting YouTubers I had started subscribing to that year as well as Tweeting about TV shows I watched such as The Great British Bake Off and its spin-off An Extra Slice, but these days I Tweet YouTubers less often than I used to (especially if two of them “shut me out” and another might have muted me) and I tend to send them direct messages on Instagram or mention them in my Instagram stories instead if I still follow them. I have recently stopped Tweeting about my favourite TV shows because my Tweets about them haven’t had as much interaction as they had done in the past, although I was flattered to see that Priya from this year’s GBBO liked my Tweet about her using ruby chocolate for one of her bakes. Likewise, I have decided to stop making posts about my latest blog posts and YouTube videos on Twitter due to their lack of engagement on that platform in comparison to Facebook and Instagram.

The social platforms I use the most have some useful tools that help me control what I consume such as the option to unfollow users on Facebook, Instagram and Twitter (although the unfollow function on Facebook differs by stopping me from seeing a friend’s posts on my News Feed yet still lets me be friends with them and I can’t remember unfollowing anyone from Pinterest), block them on all three of these platforms or mute them on Twitter or Instagram (Facebook has a similar function that allows me to snooze friends for 30 days if I need to, but I have never used it myself). I had even found myself unfollowing people on Instagram if I saw that they’d unfollowed me as well as blocking those who have had rude words in their usernames on Instagram and Twitter.

With regards to the mute function on Twitter, I have used it to mute people I didn’t know responding to my Tweets, especially if they didn’t seem to agree with them, or to mute hashtags that were about television shows that are not up my alley, even if people I follow watch them and post Tweets about them that include the hashtags (unfortunately, muting hashtags had proven fruitless because I still get notifications of Tweets from people I follow that use them). In extreme cases, hashtags have also allowed me to block people who have posted offensive Tweets that included them as well as those who have posted negative Tweets about celebrities in general or ordinary contestants on the new The Crystal Maze in terms of their body image. I have also blocked people who have posted tasteless replies to my Tweets as well as one person who offered me something I didn’t think was relevant to my needs (I did something similar to the latter on Instagram). Consequently, I have decided to DM companies I follow if I have any queries or complaints to make with them.

The mute button on Instagram was introduced in 2018 and while I didn’t use that feature upon its launch, I used it earlier this year to mute an account that posted a picture where its caption triggered me very badly because it reminded me of something I did in the past out of frustration, even though I could relate to the account to a small extent. I decided to block the account altogether a few months later as well as similar accounts I could resonate with to some degree yet they posted quotes or captions that I found horrendously objectionable. Muting and blocking these accounts were some of the toughest yet best decisions I had ever made because while I felt hypocritical for my actions, they were more beneficial for my mental health and well-being. In addition, I blocked someone who had commented on one of my Instagram posts from 2016 because not only did I think it was irrelevant of them to comment on it as I’m in a much better place now than I was at the time of the post, but the questions they asked me in the comment caused me a great deal of discomfort and were difficult for me to answer. The comment had made me archive the post too. I also blocked people who commented on some of my posts asking me to DM them because even though their comments weren’t necessarily offensive, I had no idea what to say.

While I give the majority of posts from people I follow a like, there is the occasional one that I do not give a like. This is especially true if the posts feature or mention certain people I don’t follow (a similar thing applies when I don’t comment on a YouTube video by a channel I subscribe to if it features a person or a channel I don’t subscribe to, but I still like the videos because YouTubers do not receive notifications that say, “Someone liked/disliked your video!”), especially if they did something to me online that I didn’t like or confused me and I never did anything negative directly towards them, or if the posts are more negative than usual (some were even aimed at people of different age groups from babies to the elderly) or simply because I cannot relate to them. I also skip Instagram story additions that feature certain accounts I don’t follow. Trying to ignore the negative posts or those I can’t resonate with have made me glad I am who I am.

There were certain occasions on which I have ended up taking breaks from social media platforms if things got too much on there, such as stepping away from Twitter for a while because Tweets about particular news stories became very heated. I even started browsing a website other than Twitter whilst I was going through an anxious stage because I thought visiting it would help me relieve my anxiety; however I stopped visiting it altogether a short time later because things eventually became overly catty on there.

My biggest pet peeve of consuming social media this year is that of receiving notifications of alleged “bots” (not sure if they’re bots or genuine people) on Instagram adding me to their videos and photos in the direct messages feature. People I don’t know have also started sending me messages on Pinterest, but because there is no option to read the messages before accepting or deleting the requests, I simply delete them. This has most often happened late at night or in the early hours of the morning. As a result, I decided to switch off banner notifications on my phone and tablet from 10pm until 6am by using the iOS ‘Do Not Disturb’ feature (they still appear in the Notification Centre during these times, but I can only see them if I swipe down). Not only does this feature prevent me from seeing unwanted notifications, but it also helps me sleep better. Unfortunately, this feature has made me miss notifications of genuine friends and family members messaging me on Facebook for example, so I have had to post a status update explaining why I turn off my notifications throughout the night and say that I would get back to them when the notifications are back on because I was worried they’d think I was ignoring them when I actually wasn’t.

To summarise, I completely agree with Brogan’s reply to my comment on her Instagram post about her social media consumption blog post. I especially feel that I have a good grip on controlling what posts I want to see and what I don’t want to see; using the block, mute or unfollow functions if I need to; taking breaks from social platforms or discontinuing the use of other websites; and turning off notifications through the night. I have also found out how my social media habits have changed over time.

My other blog posts about social media