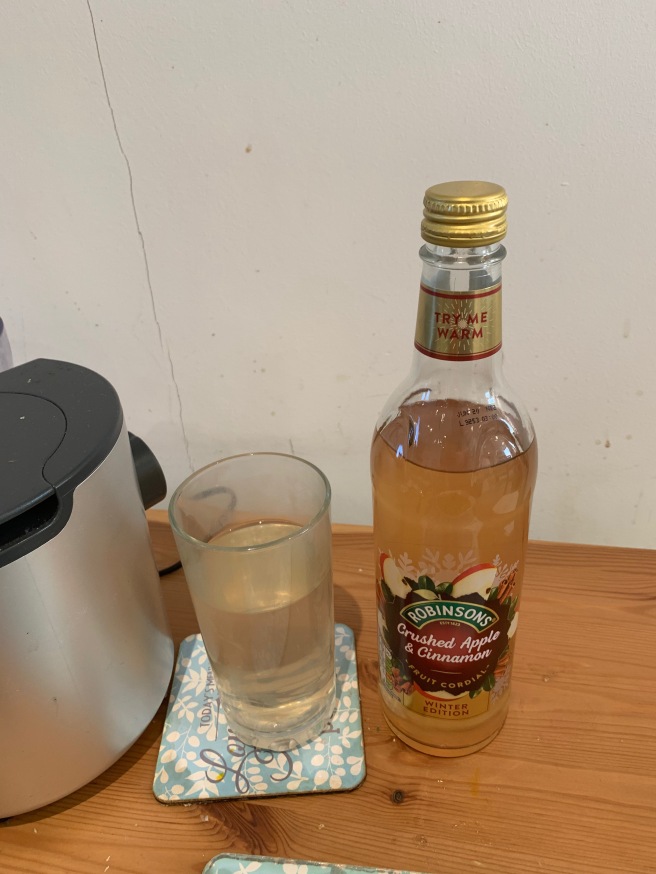 I love apple and cinnamon combinations, especially in apple pies and crumbles, so I was excited to learn that Robinsons brought out a special winter edition of their cordials that uses both flavours. 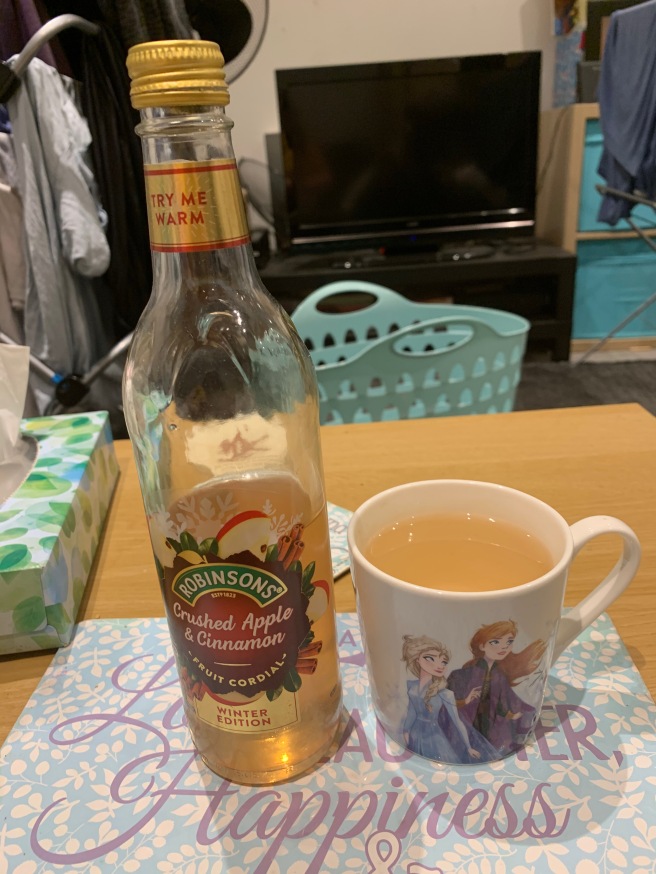 The drink has a perfect balance of the two flavours. I also tried it warm as the bottle suggested, but I found it to be sickly sweet like the Hot Spiced Apple drink from Costa that my mum and I had once. I much prefer to drink the cordial with cold water. 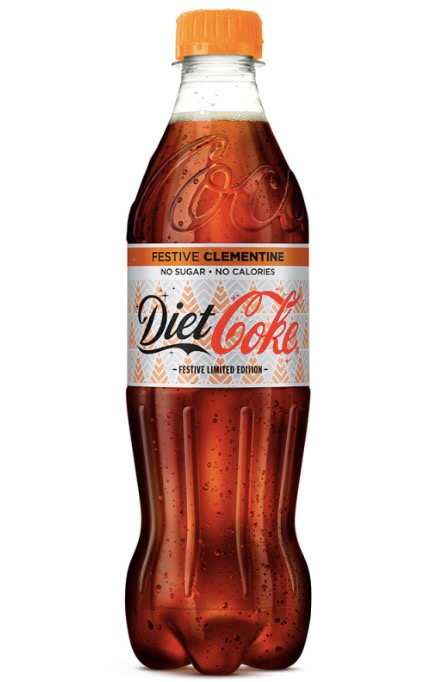 Photo credit: Coca-Cola (found on goodtoknow.co.uk, sorry I forgot to take my own photo!)

I bought two bottles of this drink from WH Smith in Liverpool Street Station after work one day as they were on special offer. Like the Coca-Cola Zero Cherry and Diet Coke Mango, I thought the Diet Coke Festive Clementine had a strong fruity flavour. I would definitely try this again if it becomes available for Christmas 2020.

I first watched this film on DVD in 2009 and I thought it was surprising, especially with the inclusion of Honey, Honey (a song I fondly remember from ABBA’s Waterloo album when I listened to it as a child) and Slipping Through My Fingers (from ABBA’s The Visitors album) as they are two of ABBA’s more underrated songs, but it was still a pretty good film. To get me in the mood for seeing the stage musical (see what I thought of it in Part 1), I rewatched it on Amazon Prime Video and I enjoyed it more on my second viewing. The film’s plot is true to that of the stage musical; there is a stellar cast including Amanda Seyfried (Sophie), Meryl Streep (Donna), Christine Baranski (Tanya), Julie Walters (Rose), Dominic Cooper (Sky), Pierce Brosnan (Sam), Stellan Skarsgård (Bill, who is Swedish in the film and the sequel) and Colin Firth (Harry); the choreography and music (despite some songs from the musical not appearing in the film and Brosnan’s rendition of SOS receiving some criticism at the time of the film’s release) are as good as those in the musical; and the luscious Greek island scenery more than makes up for the minimalistic sets in the musical.

This is a prequel and a sequel rolled into one. Five years after the events of the original film, Sophie prepares for the grand reopening of her now late mother Donna’s hotel. There are flashbacks of Young Donna (Lily James), Young Tanya (Jessica Keenan Wynn) and Young Rose (Alexa Davies) graduating from the New College in Oxford in 1979; Young Donna arriving on the Greek island of Kalokairi; and Young Donna’s first meetings with Young Sam (Jeremy Irvine), Young Bill (Josh Dylan) and Young Harry (Hugh Skinner). While this film is on par with the original in terms of the music, choreography, cast and scenery, the story is more confusing as it hops in between the present and the past throughout. Other than that, Sophie’s grandmother Ruby (Cher) was a decent character and I thought she sang the chorus better than the verses in Fernando, this film also surprised me with its music regarding a band playing Hasta Mañana in the background at one point and the scene featuring My Love, My Life made me tear up when I saw a standalone clip of it on YouTube (it also made my mum cry when she first saw the film and My Love, My Life is her favourite ABBA song). Like the stage musical and the original film, some songs here also have altered lyrics, although my mum prefers, “With all my heart, God bless you,” as opposed to the original, “So go away, God bless you,” in My Love, My Life for example.

As a fan of the original Frozen, I wanted to see the sequel when it was released in cinemas. I saw it at the cinema the week before Christmas and I thought it was on the same level as the original. In Frozen II, a mysterious voice (voiced by Norwegian singer Aurora) calls out to Elsa (voiced by Idina Menzel). She sets off on a journey with Anna (voiced by Kristen Bell), Kristoff (voiced by Jonathan Groff), Sven (also voiced by Groff) and Olaf (voiced by Josh Gad) to discover the origin of her magical powers and save their kingdom of Arendelle. While this film is darker than the original and there is a subplot that reminds me of one in The Rescuers Down Under (1990), there is an improvement in the animation, I like the references to the first film and the songs are worth a listen, especially Into the Unknown.

I watched this theatrical remake of the original 1947 with my parents on the evening of Boxing Day whilst we were on our Warner Christmas break. In this version, young Susan (Mara Wilson) has doubts about Santa Claus when other children believe that Kris Kringle (Richard Attenborough) is the real Santa. Her mother Dorey’s (Elizabeth Perkins) boyfriend Bryan (Dylan McDermott) convinces Susan to believe in Santa. When Kris babysits Susan, he tells her that if she begins to believe in Santa, she will get all three of her Christmas wishes. Although I’ve only seen small clips from the original, I thought the remake was a charming film, I like how New York City was realised for Christmas, there was an inspiring scene where Kris spoke to a deaf girl named Sami (Samantha Krieger) and Wilson’s performance as Susan was very sweet. 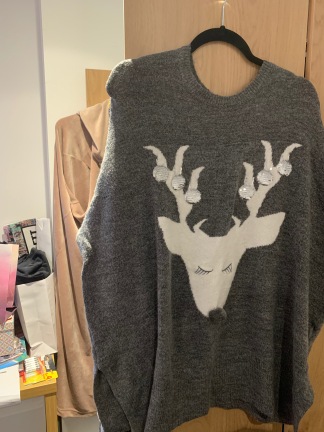 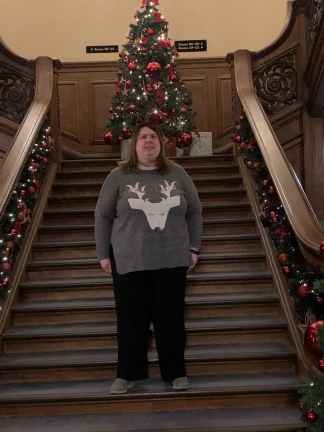 I decided to have this as my main Christmas jumper for 2019 because it is very cute. It is grey with a white reindeer’s face on it. The reindeer has its eyes closed, a grey pom-pom nose and silver baubles made from sequins on its antlers. I wore it on Christmas Day with a white T-shirt underneath, smart black trousers, grey ankle boots and my Christmas wreath Minnie Mouse ears from Hannah Marie Magic (my Elsa ears from the same business would also go well with the jumper) and it is one of my favourite Christmas looks in recent years despite the ears appearing to blend in with the Christmas tree in the background! 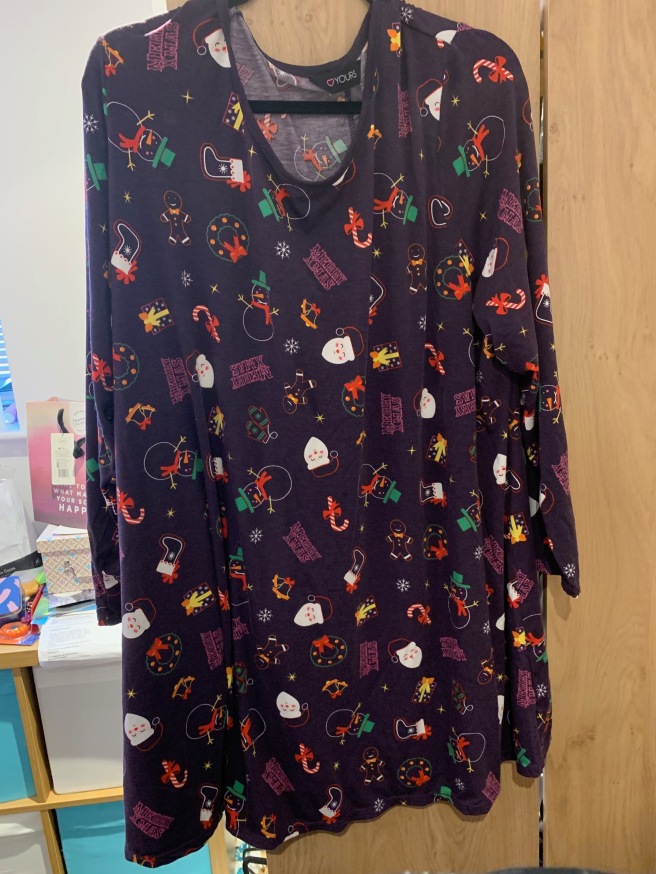 This is another item of clothing I thought would be lovely for Christmas. It is adorned with several Christmassy doodles. I wore it on Boxing Day probably with another pair of smart black trousers and ankle boots of black jogging bottoms and black, purple and silver trainers and my Anna ears from Hannah Marie Magic. You can see my tunic and my ears in my What I Got for Christmas 2019 video.

Disclaimer: This is not a sponsored blog post. All opinions expressed are my own. All photography is my own unless otherwise stated.