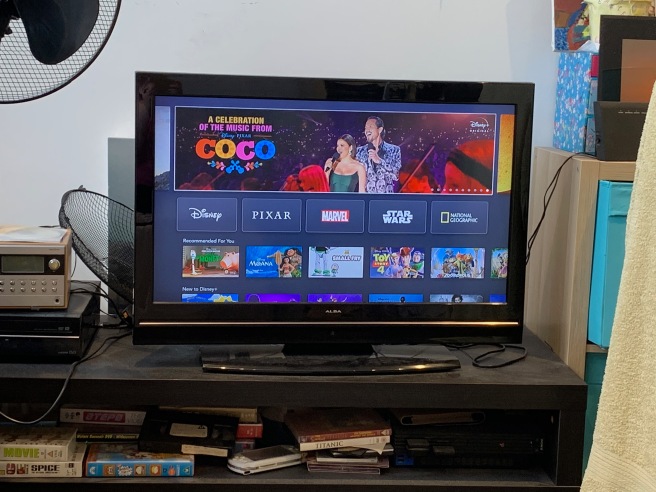 Disney+ is a visual online streaming service where people can watch Disney films, TV shows and shorts as well as those from Marvel, Star Wars, Fox and National Geographic. It launched in the U.K. on 24th March 2020 as a replacement for DisneyLife. 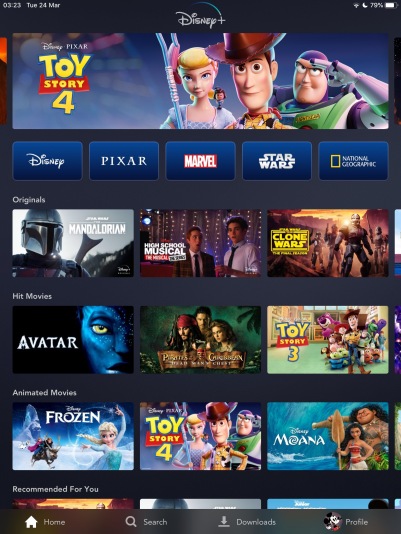 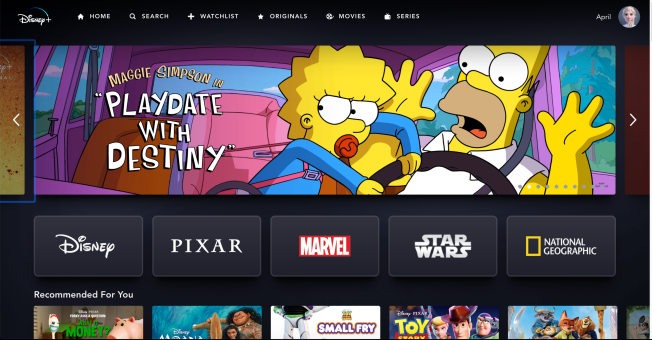 Like other visual streaming services, Disney+ can be viewed on smartphones, tablets, desktop and laptop computers, some smart TVs and Amazon Fire TV Sticks or similar devices. 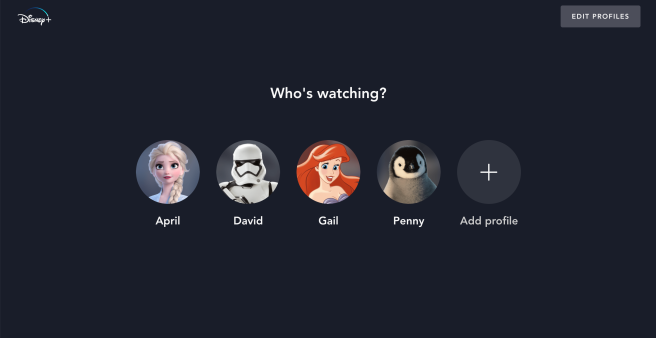 The interface of the service is similar to that of DisneyLife, Amazon Prime Video and Netflix. It is easier to navigate through my Amazon Fire TV Sticks than on my phone, laptop and tablet. Other than that, I like how individual profiles can be created and each user can have a profile character of their choice – perfect for letting my family use the service.

One slight nitpick I have is that when it comes to Disney+ Original series, only one episode of each series is released per week as opposed to other TV series such as The Simpsons where all episodes of Seasons 1 – 30 are available to view immediately. Other disadvantages are that the closing credits of shorts and series tend to be long due to them showing the voices of the actors in the foreign language dubs as well as the original English language versions while Disney+ doesn’t have the feature to watch Disney Channel, Disney XD and Disney Junior live like DisneyLife did. Also, the age rating system (0+, 6+, 9+, etc) is rather unusual and like its predecessor did, I feel that Disney+ U.K. should use the BBFC classification system for rating its content.

Here is what I have watched within my first two weeks of using Disney+ and what I recommend:

This is the very first thing I watched on Disney+. It is a short film that accompanies Incredibles 2 where Bob Parr drops his youngest child Jack-Jack off at Edna Mode’s residence overnight for her to look after him and make him a new super suit. I think this was a sweet and amusing short that was in a similar manner to Jack-Jack Attack. This short film runs alongside the climax of The Incredibles. When Kari babysits Jack-Jack, she begins to notice some strange things happening to him. I have already seen this short a few times and I think it is very cute and funny if a bit dark in places.

I loved watching this series when I was younger, so I’m glad I can finally watch it on an online streaming platform. Episodes I watched in the first two weeks of using the service were Bart the Genius, Some Enchanted Evening and Brother from the Same Planet. I would like to revisit some other old favourite episodes of the series because it is such an excellent and bittersweet animated sitcom. This is a Disney+ Original Pixar short as part of the Sparkshorts series where a father is surprised to learn that his young son Alex has the extraordinary ability to float up in the air. When Alex becomes a bit older, his father must decide if he should run and hide or accept him for who he is. Even though there is only one distinguishable line of dialogue, the bond between Alex and his father is very touching while the short is “dedicated with love and understanding to all families with children deemed different.” I have already watched this cartoon a few times on DisneyLife and it is an absolute classic. It even went down in history as the first Disney cartoon with synchronised sound. 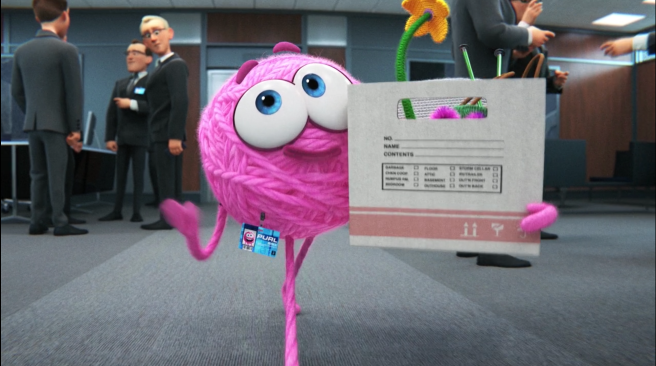 This is another Disney+ Original Pixar Sparkshorts short film. In it an anthropomorphic female ball of yarn named Purl joins a male-dominated office and struggles to fit in. This is a humorous short that has another good message about acceptance.

Lady and the Tramp (live-action version)

I enjoyed watching the original animated film when I was younger and when I saw the trailer for this live-action version, it looked really good, especially the cute dogs portraying the titular characters. Upon watching the full length film, I liked how the song sung by Aunt Sarah’s cats was changed to something more politically correct, how it seemed to include elements from both animated films and the way the iconic Bella Notte scene was reimagined, but I was slightly disappointed by the differences from the original film.

I decided to rewatch this after having watched the live-action film and I much prefer it. While the Bella Notte scene made me cry when I was a child and some scenes are more memorable than others upon rewatching it as an adult, it is still a great film for dog lovers like me.

I have previously seen bits of this film in the Nostalgia Chick’s Top 10 Worst Disney Sequels video on YouTube and I was curious to watch the whole film. The film focuses solely on Scamp, one of Lady and the Tramp’s four puppies, who desires to become a street dog like his father once was, but he must decide if he wants to continue with his new-found lifestyle or return to his family home. Even though this direct-to-video sequel is not quite as good as the original (my favourite direct-to- video Disney sequel is Aladdin and the King of Thieves), I still liked the opening song and Scamp and Angel’s take on the Bella Notte scene.

As a fan of The Great British Bake Off and its spin-offs, I was intrigued when I saw a preview of Be Our Chef on YouTube. In each episode, two families compete against one another to create a dish that is based on a particular Disney film and has a special element, for example a Mulan-inspired dish that has a hidden ingredient. A professional chef then judges each dish based on creativity, presentation and taste. The winning family in an episode win pins based on the film their dish is inspired by and the overall winning family will win a Disney cruise at the end of the series. This is a very inventive and entertaining series. Fans of The Great British Bake Off and Masterchef are bound to enjoy it.

Maggie Simpson in Playdate with Destiny 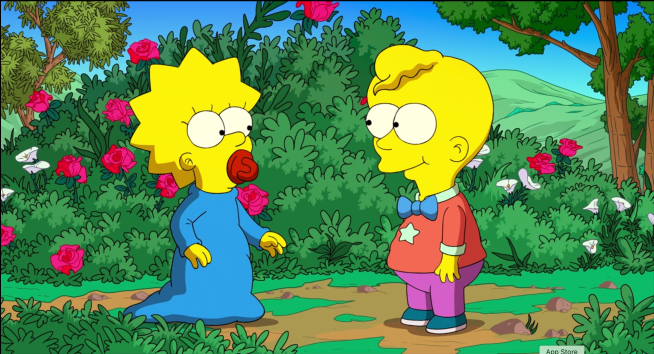 This is a short that features characters from The Simpsons and was shown before Onward at the cinema before cinemas closed in light of current events. It stars Maggie, who Marge takes to a playground, and another baby named Hudson, who saves her from harm’s way. Maggie and Hudson fall in love with each other only to be separated a short time after. Will they meet again? I think this short is very effective in terms of not using any spoken dialogue and it is also adorable and hilarious, especially when Maggie makes Homer shove his burrito in his face.

This is the third Sparkshorts Disney+ Original Pixar short I have watched. A stray kitten and a pitbull form an unlikely friendship. The art style is different from that in other shorts in the series and the animation’s a bit jerky in places, but the friendship between the kitten and the pitbull is very sweet.

Overall, Disney+ is a perfect replacement for DisneyLife. Its ability to watch Disney television channels live may be gone, the ease of navigation varies between devices, only one episode of a Disney+ Original series is released per week, the closing credits of shorts are lengthy and its age rating system is a little bit odd, but I like being able to watch some old favourites on it as well as shorts, films and series that are exclusive to the platform. It is also very good value for money on the whole.

Disclaimer: This is not a sponsored blog post. All opinions expressed are my own. The photo of Disney+ on my TV is my own while I took screenshots of the interface of the service and stills of content by myself and the trailers are from YouTube.